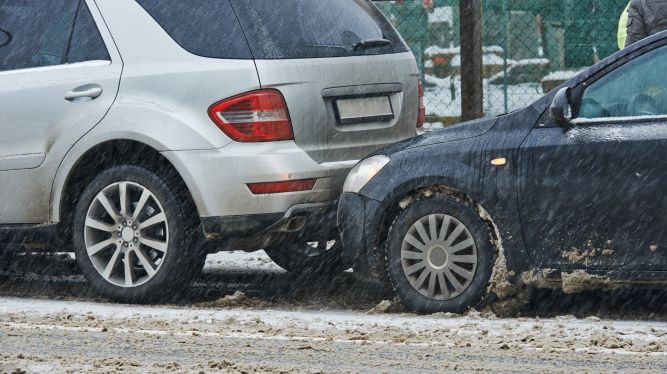 The scene on the Kennedy was chaotic after a 50+ car pile-up early Wednesday morning. Portions of the expressway were closed for about five hours, 12 ambulances were on sight, and 14 people were transported to area hospitals. Another 45 were medically evaluated at the scene. But, there’s one thing that may be more complicated than dozens of cars and trucks colliding during a springtime snow in the middle of a global pandemic: sorting out liability and securing the compensation you deserve.

The unseasonable winter weather undoubtedly contributed to the crash. But, external factors like slick roadways rarely tell the whole story. Drivers are expected to take note of hazardous conditions and adapt accordingly. When the road is slick and snow may be impairing visibility, for instance, a driver should reduce speed and increase the distance between vehicles. Distracted driving can also play a role in a multi-car accident, since diverted attention may mean a driver loses critical response time and is unable to avoid joining the pile-up.

Healy Scanlon has experience with multi-car and truck accidents. Recently, we handled a wrongful death case for a 50 car pile-up in Michigan City, Indiana. The case resolved after three mediation sessions at ADR Systems. It was the largest mediation ever conducted by ADR.

Determining Liability in a Multi-Car Accident

Police reports and witness accounts provide a starting point for investigating who was responsible for injuries sustained in a multi-car accident, but more in-depth investigation is typically required. Often, more than one driver contributed to the accident. In some cases, partial liability will lie with someone who wasn’t even involved in the accident, such as:

Often, identifying possible responsible parties and building a case requires the use of experts, such as accident reconstructionists. And, if a commercial motor vehicle was involved, there may be an additional set of laws and regulations in play, such as federal hours-in-service limits for truckers. This complexity is one reason it makes sense to connect with an experienced local car accident attorney right away after a serious traffic accident. The further removed you are from the accident, the more obstacles you may encounter in reconstructing what happened and showing who was responsible.

What if More than One Party is Responsible?

In car accident cases, it’s not unusual for two or more parties to share responsibility. That’s all the more true when the accident involves several cars–or, like the Wednesday morning crash, dozens of cars.

In that situation, it’s important that you identify all responsible parties. Otherwise, the party you’re pursuing for compensation may point the finger at the missing parting. Depending on the specifics of the case and how the jury weighs that evidence, it could mean a reduced recovery or no recovery at all. Therefore, it’s critical to thoroughly investigate before moving forward.

If the jury determines that two or more parties are each partly responsible and you’ve sued them both, they can apportion liability. That means each can be ordered to pay a percentage of your damages in proportion to their responsibility.

What if I’m Partly Responsible?

If your own fault played a role in the accident, you may still be able to recover some of your damages. Under Illinois law, someone who was partially responsible for the accident (and therefore for his or her own injuries) can still be awarded partial compensation as long as he or she is not more than 50% responsible. For example, if you suffered $100,000 in damages and the jury found that you were 20% responsible, you could be awarded 80% of your damages, or $80,000.

If you’ve been seriously injured in a car accident, you have enough to manage. The last thing you need is the added stress of trying to identify possible responsible parties and negotiate with insurance companies.

The attorneys at Healy Scanlon dedicate their practice to helping people who have been injured secure the compensation they need to rebuild. We’ve secured hundreds of millions of dollars for our clients who have been injured through someone else’s negligence. To learn more about how we may be able to help you, just call 312-226-4236 or fill out the contact form on this site. The initial consultation is free.